The original God of War (2005) game, developed by Santa Monica Studios, was a masterpiece. It brought gamers a new story about revenge, betrayal, and absolute rage, while featuring a phenomenal live orchestra soundtrack, breathtaking graphics, and stunning presentation for its time. It also featured intense stylized violence against fantasy monsters and gods in Greek mythology. All of these elements combined together to introduce the ultra hardcore video game icon: Kratos.

As the story of God of War unfolds, we learn about Kratos’ origin and the intense level of suffering he has had to endure for the Gods of Olympus. Between being deceived, betrayed, and cursed by having the ashes of his family fastened to his skin for all eternity, it is easy to understand why he is so filled with rage. Kratos is a warrior engulfed in conflict on all levels and has turned his suffering into fuel for his rage and targets the gods who have hurt him so greatly.

My experience with God of War was shocking and it has shown me how stunningly intricate a video game storyline can be. In everything Kratos experiences you can feel his pain. You suffer with him through the entire game, fighting all sorts of mythical monsters and creatures to get to the one being who pushed him beyond the point of no return. 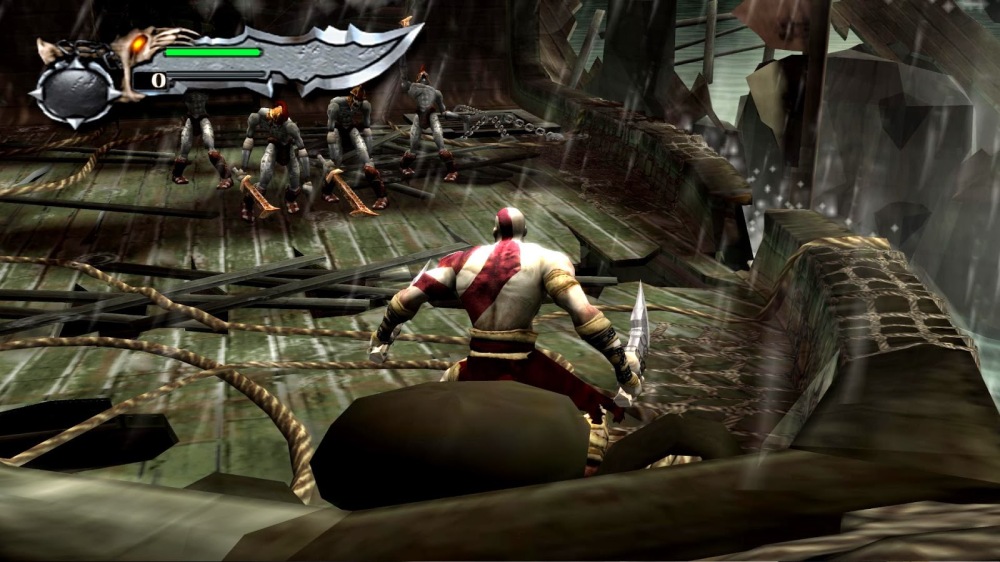 Everything in the game was presented to the player in a way that connects the story to Kratos, including his very design. This was, by far, one of my favorite things about God of War. Each part of the story not only explains the events that happened in his past, but also explain why Kratos looks and acts the way he does. From his physical appearance to his weaponry, all of him is rooted from a brutal past. The game has an insanely amazing character connected on all levels that blend seamlessly with the storyline.

I was a teenager in high school when I played God of War for the first time, so I already had my own personal anger issues and it was not my hottest year for positivity. More importantly, I did not have many friends I could talk to at the time, nor did I want to discuss all those issues with anyone, so playing video games was my only way of breaking free and letting go of my anger and stresses of daily life.

Because of what I was experiencing at this time, God of War really became a turning point for me in the sense of learning what I wanted to do in the future within video games. I became inspired by the game and I knew I needed to be involved with the story writing portion of video game development.

I felt so connected to the character not only because Kratos was well-written, but because the events in my life somewhat ran parallel to Kratos’ story. Obviously, Kratos goes through some seriously traumatizing events and I am not trying to compare those events directly (since nothing remotely close to what he experiences in the story happened in my life), but instead the emotions I experienced were similar to his as I watched him get betrayed.

Playing as Kratos really stuck with me on a personal level because, in a sense, he was me. He was so mad at gods who have lied and hurt him so his epic struggles of revenge were the emotional equivalent of my own. As I played the game and tore enemies apart with my (Kratos’) bare hands, destroyed all manner of beasts, solved puzzles, and slayed the final boss, I was also mentally destroying the problems I had in my own life. Kratos and I had shared that rage and I remember feeling so engaged and connected with his story. I wanted him to destroy everything the villain, Ares, had thrown at him, and as I progressed, I felt so accomplished and proud that he had prevailed. I experienced a bond with this character on a level that I have rarely experienced again in other video games.

After completing God of War, I was left mesmerized by its conclusion and could not believe what an epic experience it was. The game completely opened my understanding of what a video game can be. More importantly, it helped me to understand that games are more then just a pastime or hobby. There is something special and almost magical about getting immersed in a video game world and becoming the awesome character for a while. Video games like God of War are works of art and they allow us to break away from the chaos and stresses of our daily lives. They provide this awesome gift of mental freedom when we need it, and this is just one of the many reasons why I love video games and their phenomenal stories.

Hello and welcome fellow gamers! My name is Alex. I'm a hardcore gaming enthusiast, and writer/blogger from New York City. I have been gaming since childhood and it seems to be my calling in life. I created Inside A Gamer's Life to talk about games in depth and teach others that there is more to video games that they may not know about. Video games are an art form. As well I am hoping to teach as many people about living a healthy gaming lifestyle along the way through moderation to minimize damaging habits that can lead to game addiction and depression.
Loading Comments...
%d bloggers like this: